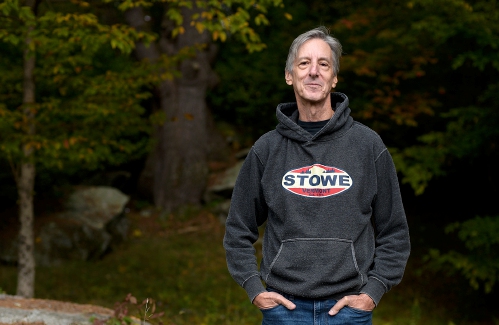 During the latter half of the Trump years, Andy Borowitz went on a comedy tour called “Make America Not Embarrassing Again.”

If that sounds like partisan business, it kind of was. In his act, Borowitz, the famous name behind the satirical Borowitz Reportchronicles how Sarah Palin’s botched run for vice president in 2012 set the stage for Donald Trump.

The tour was cut short by the coronavirus pandemic, but it left Borowitz with a deeper curiosity about the origin of the trend of anti-intellectualism and ignorance on the part of top American leaders. It used to be that presidents had to appear knowledgeable, and for the most part they were. Now not so much.

“The framework I found is for the past 50 years,” Borowitz said in a phone interview Tuesday. The period covers Ronald Reagan’s successful 1966 bid for governor of California and Trump’s victory in 2016. The connection? Both men were TV hosts who eventually won the White House.

“We really haven’t looked back since,” Borowitz said.

The result of his research is a new book, Profiles in the Dark: How U.S. Politicians Got Stupid and Stupid. The book was released last month, and Borowitz took it on the road to New York and Los Angeles before returning it to Hanover, where Borowitz has lived since mid-2020. He will take the stage at the Hopkins Center for the Arts at Dartmouth College on Tuesday.

Whether Profiles in ignorance sounds like a partisan business, it’s not quite. Borowitz finds ignorance among politicians on all sides (Bill Clinton cultivating his “Bubba” persona, for example) and in his own habits of mind. But the bulk of the damage done to the American public by a politician’s ignorance — the war in Iraq, unnecessary deaths from HIV and the coronavirus — was done by Republicans, he said. The list of such episodes, from the Reagan administration’s Iran-Contra affair to Trump’s comment about “fine people on both sides” of a white nationalist rally, is bewildering. The book is a litany, or series of them, with one alarming event after another.

It’s also a bit of a departure for Borowitz, who wrote The Borowitz Report since 2001. Yes, this epic tale of political ignorance is laughable, but the question of why so many of our recent presidents and other top leaders have been so knowledge averse is inherently serious.

As a result, writing the book made him more of a journalist than a satirist. After the 2016 election, friends told him he did, that the satire would spread. It is not, he said.

“It’s so hard to make fun of someone who is so clownish and absurd,” Borowitz said of the country’s 45th president. In writing about Reagan’s approach to AIDS and homelessness and George W. Bush’s approach to terrorism, the jokes are there for the picking, but not the satire.

“There’s absolutely nothing funny about any of this,” Borowitz said. “It turned out to be a very different book from what I had planned to write.”

Profiles in ignorance divides its 50-year history into three chunks: Ridiculous, when people still made fun of ignoramuses in politics; Acceptance, when it has normalized; and Celebration, where Trump and his cronies have taken us.

But a conclusion follows, and it is less gloomy and humbler than the grandiose ignorance that precedes it.

Borowitz grew up and went to public schools in suburban Cleveland, then went to Harvard, so education is important to him, so much so that he thought it would solve the problem of ignorance in politics.

“(M)but there’s not a ton of evidence that it would translate to smarter leaders being elected,” he wrote in his conclusion. “Why? Because our emotional and not very rational engagement with politics makes even the most educated among us able to vote like dopes. That’s true no matter where you are on the political spectrum.

The antidotes are humility and community, Borowitz said, and living in Hanover while he was writing the book helped him see that.

Living in Los Angeles (where he and his first wife created The prince of Bel-Air in the 1990s), and later in New York, politics tended to be abstract and impersonal, he said.

“I think living in Hannover has reformed that view,” he said. Municipal assemblies and smaller-scale government, where people work together to solve problems, offer “our best chance for democracy”, he added. He will join the city’s Howe Library board later this month, his first foray into city government.

As they moved to Hanover from New York during the pandemic, Borowitz and his wife, Olivia Gentile, had the Upper Valley in mind. Gentile (pronounced jen-tilly) got his start in journalism at Herald of Rutlandworking out of his office in Springfield, Vermont, and covering the Upper Valley.

The reporter’s instinct has rubbed off on Borowitz, but he can’t help but make jokes. Reality demands laughter.

“It’s very depressing,” he said. “But I think one thing that’s really positive for me about being an actor is that I find telling a joke is really cathartic.”

Tuesday’s event at the Hopkins Center will mix the serious and the ridiculous. Borowitz will be in conversation with Charles Wheelan, a lecturer from Dartmouth who has written his own funny books. And Karyn Parsons, who played Hilary Banks on the original Fresh Prince of Bel Airwill be on hand, primarily to read Borowitz’s selection of the 20 best quotes from Dan Quayle, the walking malapropism who served as vice president from 1989 to 1993.

Borowitz said he sees a glimmer of hope that the political winds are moving away from ignorance and back to knowledge and skill. Voters in Alaska defeated Sarah Palin in a special election on August 31.

“I think that’s partly a reflection of Alaskans’ desire not to elect a national joke,” he said, adding that “at least in this test case, ignorance didn’t win.”

God’s country, the feature debut by Hannover native Julian Higgins, will screen Friday at 7 p.m. in the Spaulding Auditorium at the Hopkins Center. Higgins will be on hand to talk about the film after the screening. Tickets are $10.

I won’t go into all the details here, because the joy of First Friday is just to go there and be pleasantly surprised.

OK, a few details: Two Rivers Printmaking Studio, in the Tip Top Media Arts Building on North Main Street, is hosting “Multiple Avenues: Artists Explore Printmaking,” a faculty exhibit, through October. A reception is scheduled for Friday evening from 5 to 7.

And the Kishka Gallery, on Gates Street, will host a reception for artist Edie Fake, in conjunction with the Center for Cartoon Studies.

Between these two places, be sure to stop by the Scavenger and Long River galleries, and the Main Street Museum, where the piano player will be making music.

FLAME The Band, an ensemble from upstate New York, performs at 4 p.m. Sunday at the Opéra du Liban, a benefit performance for Visions for Creative Housing Solutions, a local nonprofit organization.

The group itself has a story to tell: its members have physical and developmental disabilities. They have won an international following for demonstrating that anyone so emotional can go wild. Tickets are free, but registration is required through lebanonoperahouse.org or 603-448-0400. A donation of $5 to $10 at the door, in cash or by check, for the housing group, would be welcome.