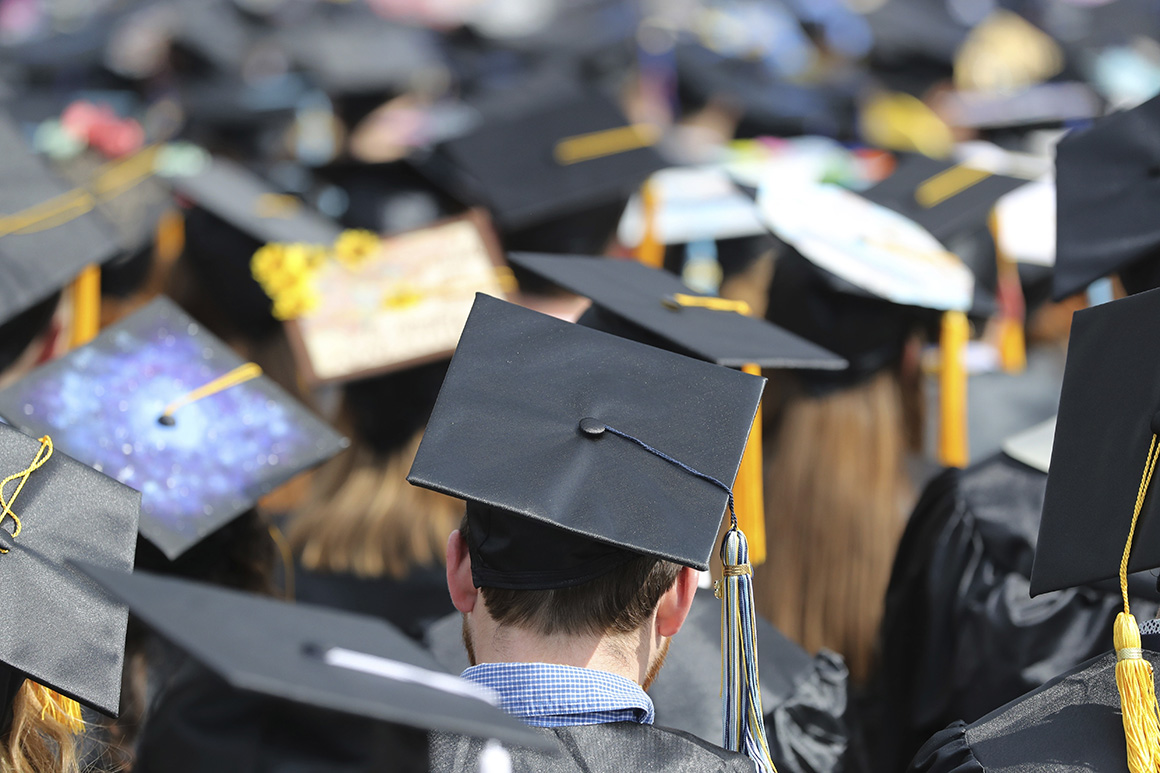 The logic is uniquely American and incredibly harmful. He’s captured well in the familiar Hollywood trope of a teenager, finding out about his family’s financial troubles, darkly conceding he can drop out of his first-choice school and attend nearby state college, only for a determined parent insists: No, we’ll find a way.

In America, it is meant to be inspiring. But statistics suggest it’s more likely a tragic mistake.

The story goes that the university degree is the sine qua non of economic opportunity, and the college experiences a unique inflection point in its life to come of age and launch itself into adulthood. On this basis, American culture has made it an implicit parental obligation, and American law has made it an explicit public obligation, to facilitate the attendance of any student at any school, regardless of the cost. Young Americans and their families are encouraged to save as much as possible and then take on the necessary debt — by a culture equating the practice to “investing in your future,” by policymakers offering grants to promote debt, and by colleges who cash checks in advance while accepting no liability down the road.

But the story is false. Students who enroll in college are more likely to drop out or graduate in jobs that don’t require a degree than they are to navigate the planned path from college to career. Research also suggests that it doesn’t matter what school you attend: for men, school selectivity has no effect on future earnings; for women, more selective schools lead to longer hours worked and lower marriage rates.

Indeed, it is not clear what we are getting for our money. On average, US colleges consume more than $25,000 per student per year, second only to Luxembourg among developed economies and more than twice spending in countries like Denmark, France and Germany. The focus on elite private colleges is particularly harmful: while we constantly confused the cost of the “college experience” with an “Ivy League education”, the median tuition for a four-year public university in the state is still only $8,300 per year. Every kid in America can pay their own way to a perfectly good college for about half the income from a minimum wage part-time job.

The cognitive dissonance between the unquestioned incurring of extravagant spending on college and the dubious value of that spending is what gives America’s bizarre discourse on student loan debt — and leads to irrational policy actions like that of Biden. Is there a better way?

There is a deep contradiction into our national beliefs about college, and that embodies perfectly the thinking that drove Biden’s decision.

For one thing, under the assumption that degrees are valuable and consistently yield a high return on investment, US law only excludes student loans from discharge through the traditional bankruptcy process. We are so confident in the wisdom of unconstrained spending on higher education that we are creating a public guarantee for student loans – a form of credit that would otherwise make little sense to extend – and, to protect lenders, we are eliminating the recourse that borrowers have traditionally had when their investments disappoint or they spend beyond their means.

You can rack up tens of thousands of dollars in credit card debt by taking a vacation and walking out of bankruptcy court without owing anything. But the debt you incurred for the wonders that changed your life on a college campus? It must stay with you until death.

On the other hand, because we knew full well that the social promise underlying debt is dumb and fractured – in fact, college is often a bad bet with a low return on investment – ​​progressive politicians began to demand that the government erase it. absolutely. To extreme, they equate its very existence with “violence”. Nobody ever explains what makes the student borrower more deserving of government largesse than the family who took out a car loan for the car that puts dad to work. On the contrary, the implicit judgment seems to be that the nation must, having sanctified the borrowing, collectively assume responsibility for the result.

The result is a dysfunctional higher education funding system that has generated more than $1.7 trillion in unpaid student debt, representing many loans that were wrongly offered and accepted by borrowers now facing to unbearable burdens and deserve a path of relief.

So what should happen? Biden’s approach of simply wiping out the debt treats the obvious symptom – the debt – in the quickest and easiest (and also the most expensive) way, while doing nothing to address the underlying problem.

Instead, America should accept the banality of the student loan as just one form of debt among many – chosen by some for investment purposes, and by others for what amounts to conspicuous consumption, exploited by sellers of a product of variable quality. Luckily America has a very good legal system to govern regular debt, with risk management structures on all sides, options for sellers to provide credit themselves if no one else the fact, and fair relief for those who make commitments they cannot keep.

The keystone is our uniquely lenient bankruptcy system. Unlike most other countries, the typical American can go to court, declare himself insolvent, hand over some remaining assets, default on his remaining debts, and return home to a lawsuit-free home. This choice is by no means easy — his credit rating plummets and borrowing becomes more difficult and expensive; friends and neighbors are likely to notice, as well as anyone who performs a background check in the future; feelings of failure and the shame that accompanies it are common. So as the Americans file for bankruptcy much more frequently than Europeans, the occurrence is rare enough that consumer credit remains widely available and affordable. The cost of bankruptcy is low enough to encourage risk-taking and ensure that someone who really needs a fresh start can get one, but high enough that most who can avoid it do so. that they can to avoid.

This is the option that should be available to all student loan holders.

Pursuing the desacralization of student debt, we should eliminate the maze of scholarships, loans, grants, and government guarantees that affirm an unlimited public commitment to fund whatever a university can think to charge. Public support should come at the state level through funding state university systems and at the federal level through a simple means-tested grant that covers, say, 50% of median public university tuition. of the state over four years. Tying the value of the grant to the median state would prevent individual schools from extracting more money by raising tuition fees. Room and board costs would be excluded. Young adults not enrolled in college do not expect the public to pay for their accommodation or food; neither do the registrants.

Where would students find additional funds for more expensive options? A market for private loans would probably exist, but in the absence of guarantees and subsidies, credit would be scarce and expensive. Borrowers would tend to have limited credit histories and few assets. Lenders would be in a poor position to assess the likelihood of successful repayment. The prospect of a bankruptcy discharge would add additional risk. These obstacles are features, not bugs. Lending large sums of money to teenagers with uncertain prospects and no collateral is a bad idea for lenders because it’s a bad idea, period. Finding ways to make it attractive enough to saddle these teenagers with loans does no one a favor (apart from college administrators).

Fortunately, the institutions exist with the capital to fund all the borrowing needed, the information to assess the wisdom of borrowing to enroll, the resources to help students succeed, and the incentives to make the system work. These institutions, of course, are the colleges themselves. Just as sellers fund cars, capital equipment, and sometimes real estate, colleges should be expected to fund the education they provide. Instead of cashing tuition checks before freshman orientation begins and letting the student one day repay a third-party lender, colleges should receive their students’ tuition after the fact, when those students have been launched into careers that allow them to afford the payments.

This change would initially require institutions without large endowments to borrow working capital to provide education today that would be paid for tomorrow. But most institutions will have enough fixed assets to guarantee the loans, and the federal government could play a role if necessary by guaranteeing this financing — default quickly leading to liquidation.

Meanwhile, students who chose to borrow under the old system would continue to pay off those debts if they could and would have the option of declaring bankruptcy if they couldn’t. Such bankruptcies would cost the federal government far less than Biden’s large-scale loan cancellation, and would help the transition to a better system and mindset rather than Biden doubling down on the broken one.

Colleges dependent on future revenues from their own alumni to fund their operations would face a radically different set of incentives than they do today. They would have no choice but to structure their programs to be affordable, relative to the value they provide. They would have no choice but to make admissions decisions based on likely future success, rather than ability to pay up front. And they would suddenly find it in their vital interest to ensure the successful integration of their students into the labor market and even to offer them subsequent training opportunities.

College administrators who say this model would not work are simply admitting that their models do not work without a nation fascinated by their mystical incantations. Let them, not their students, suffer the consequences.

2022-08-24
Previous Post: Marc Lapadula, playwright and screenwriter, dies at 62
Next Post: IFH 610: Inside the Raw Reality of Being a Screenwriter with David S. Goyer