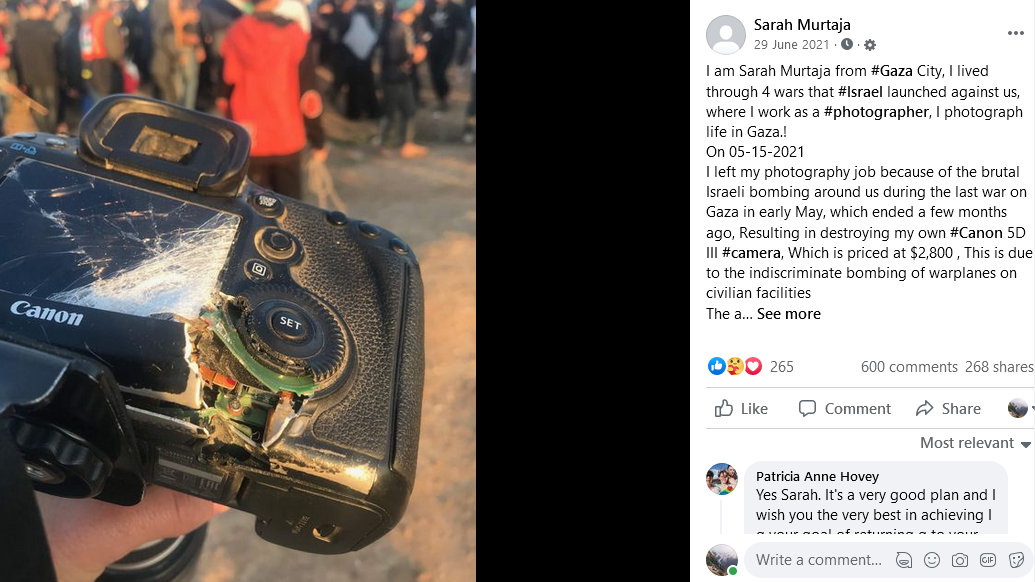 A fake Palestinian photojournalist against a famous satirist

Australian satirist, Bryan Dawewas duped by online scammers claiming to be a young Palestinian photographer, whose equipment was allegedly destroyed in an Israeli bombardment of Gaza.

The Tangier-based Australian, a writer and artist best known for doing political interview sketches with the late John Clarke, thought he was doing a good deed by using his profile to help replace the fake photographer’s equipment , Sarah Murtaja.

But it was later revealed that Murtaja’s photos were taken by other Gaza-based photographers, and the young Palestinian is likely a creation of a criminal syndicate. Luckily Dawe discovered the scam moments before transferring the money, which allowed him to issue refunds, but the scammers sought revenge.

In May 2021, Dawe was moved by a heartfelt Facebook post written by the person or persons claiming to be a young photojournalist asking for help to replace her destroyed photographic equipment. Her post included a photo of a crashed Canon 5D III and a note that Israel was “preventing the introduction of financial aid to Gaza”, so she “created a donation campaign via PayPal, and I hope good people will give even a little”. ‘.

‘I’m Sarah Murtaja from #Gaza City, I lived through 4 wars that #Israel launched against us, where I work as a #photographer, I photograph life in Gaza!
On 15-05-2021 I quit my job as a photographer because of the brutal Israeli shelling around us during the last war on Gaza in early May, which ended a few months ago, resulting in the destruction of my own #Canon 5D III camera , priced at $2800. This is due to the indiscriminate bombardment of combat aircraft on civilian installations.
The associations did not compensate me, because Israel prevented the introduction of financial aid to Gaza, where I created a donation campaign via #PayPal. At the request of my friends, and I hope the right people will donate even a little, to buy a new camera and resume photography work to uncover Israel’s crimes and continue to portray the life of Gaza to the world
Thanks to the right people, I’ve raised $2154 so far and I’m still collecting the rest of the money, and I won’t need much because the donation is collective. $15, $30 or maybe $50 would be much appreciated.
Please remember that your donation is not intended for me personally, but rather represents your support for the Palestinian people.

The Facebook post garnered more than 269 shares and 600 comments, including several from people confirming they were supposed to have “donated”. Sarah Murtaja’s profile is incredibly active, with many new posts every day showing “everyday life” in Gaza. There are hundreds of photos — possibly over a thousand — posted since June 2021, and the account has over 1,000 followers.

Finding the photos and writing the captions would be monumental work for an individual, suggesting that more than one person is behind the account, and it is difficult to determine why the account exists. The June 2021 donation scam has not recently been invigorated or promoted through the account, with the last two posts randomly promoting a YouTube account dedicated to cute cat videos. On top of that, the account’s feed is mostly made up of images of daily life in Gaza, as well as anti-Israeli occupation posts.

So it’s understandable that Dawe was moved by Murtaja’s story and, uh, “his” photos.

“His photos showed a human side of Gaza and Palestine absent from the normal media portrayal of death and destruction,” Dawe said of the photos accompanying the message to the Sydney Morning Herald. “The photos told another, more heartening account of young children trying to survive and live their lives in the chaos of an ongoing war.”

Dawe offered to create hundreds of special edition prints by adding “my digital art to existing photos”, including their two signatures, for sale in a Melbourne art shop. “This would hopefully generate interest in her cause and make up for the money she was asking for.” It worked – about $3,000 was collected, and the scammers must have been delighted with what almost fell on them.

‘Having reached more than the required amount – friends have also donated to ‘The Gaza Project‘ without asking for prints or cards – I was ready to transfer the money to the PayPal account.’

The 74-year-old satirist said just before the transfer that he discovered that Paypal was not operating in Gaza, although Murtaja requested that the money be transferred through the payment platform. “Naturally, a very loud bell rang.”

The satirist reached out to customers to offer refunds, as well as informing various publications that their photographers’ images had been stolen. In October, an Adelaide-based cybersecurity expert confirmed that Dawe had been scammed, the herald reports.

Unfortunately for Dawe, it didn’t end there. He continues to be harassed by online scammers, receiving a fake deep sex video allegedly showing him in an attempt to extort money.

In response, Dawe shut down his social media accounts in December, but the herald reports that a fake Facebook account is now created and remains active in his name. The fake Dawe account is incredibly persuasive and is currently pushing another donation scam. This one is aimed at older Indigenous Australians, and unfortunately seems to have fooled many and collected thousands of dollars in donations.

The only small giveaway suggesting the account is linked to the same crooks is a post supporting Palestine using a similar writing style with hash tags as Murtaja’s post.

“On August 5, two weeks ago, #Israel launched a fierce war against #Gaza, unfortunately there were many civilian casualties. I supported Palestine on #Facebook with messages and photos, unfortunately #Meta deactivated my account without warning.’

Dawe’s friends have exhausted all options to close the account, but Meta has yet to take any action.

2022-09-13
Previous Post: What is the best ? – Forbes Advisor
Next Post: Political satirist, Randy Rainbow, on life beyond his parodies